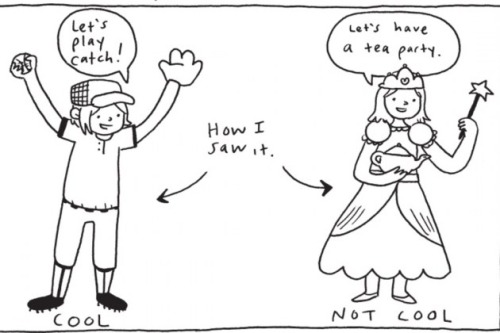 A phrase I’ve used more than once in my life, always with pride.

I have always defended my lack of traditionally feminine qualities by calling out harmful  gender stereotypes whilst also using this line when it comes to drama, makeup or being fussy.

I didn’t know they were two different things. I didn’t realize how harmful this line was until recently. It was a rude shock when I read this article and realized I used 3 out of 4 phrases listed there.

Internalized Misogyny. This happens when oppression runs so deep that you don’t recognize it anymore. So deep that women discriminate against themselves.

Claiming I’m not like other girls, true though it may be, implies that they are in some way inferior. It implies that I don’t want to identify with them.

This is how stereotypes get propagated. By saying “I don’t wear makeup, I’m not like other girls” I am implying all girls wear makeup.

I grew up without the traditional girly education because my mum’s pretty clueless with an eyeliner too 😛 I have always shot down people who have told me makeup gives them confidence, looking good makes them feel good but somewhere along the line, defense became offense and I came to construe those girls as shallow.

As far as epiphanies go, this is a pretty rude one.

Now, this thing about not calling “other women” irrational, dramatic or bitchy, it makes sense. On paper. But …but when I look around at the kind of girls I have come across, I can’t help think  …..”Hell no, I’m not like them!”. *runs away*

*comes back after a while*

Is that super misogynistic of me, that a small part of me thinks my opinion makes sense? Don’t get me wrong, I know a few bad ones can’t define a whole gender. I know rational women, for whom I have a lot of respect and I also know ..other ones. I’m sure all of us do.

There are girls who give new meaning behind “Mean girls” and yes, I know they are probably victims of harmful stereotypes but I just can’t bring myself to identify with them. I feel like a liar.

Would it really be considered misogyny if I call out an attention monger for who she is? She could be looking for validation with attention, and maybe I’m helping her? Fundamentally, if I’m different from these kind of women, is it wrong to declare it?

It’s the misogyny talking, it runs deeper than I thought. I’m working on it. It takes time, right?

A 19 yo moderate feminist. Cynical and sarcastic. I swing between being a realist and a dreamer. View all posts by Appy

Other stuff I wrote